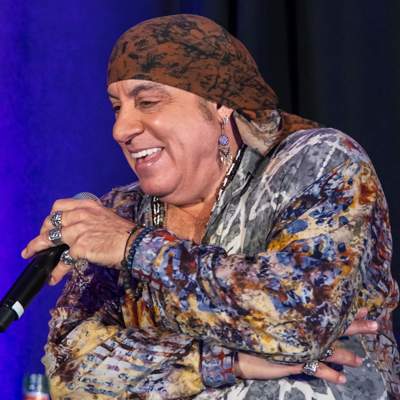 This member of the Rock and Roll Hall of Famer who goes by “Little Steven” will serve as “Little Steven,” served as keynote speaker of Making Vinyl 2018 at the Westin Book Cadillac Hotel in Detroit. The conference, which debuted in November 2017 attended by nearly 300 industry professionals from 16 countries, celebrates the global rebirth of the record manufacturing industry.

Known for his starring role as “Silvio Dante” in all seven seasons of HBO’s television drama The Sopranos, Van Zandt also helped create the “Jersey Shore” sound with the Asbury Jukes, and became a founding member of Bruce Springsteen & The E-Street Band (Co–Producing the band’s seminal albums “The River” and “Born in the U.S.A.”, and with whom he was inducted into the Rock and Roll Hall of Fame in 2014). In 2018, Van Zandt’s own band, Little Steven and the Disciples of Soul, has been on the road in the U.S. and Europe currently on the road in Europe with their “Soulfire TeachRock Teacher Appreciation Tour,” his first solo tour in 20 years.

Van Zandt’s album Soulfire LIVE!, initially out digitally and on 3 CDs, will be released soon as a seven-LP boxed set. The live album comes on the heels of Soulfire, Van Zandt’s first studio album in more than 15 years.

Van Zandt launched Wicked Cool Records in 2007 to support new rock ’n’ roll bands. Among the label’s releases are 11 critically acclaimed compilations featuring music from “Little Steven’s Underground Garage” (CBGB Forever, Christmas A Go-Go, Halloween A Go-Go, and Coolest Songs In The World Volumes 1-8), and is distributed with The Orchard.

As a music business impresario, Van Zandt founded Renegade Nation in 1999, which led to “Little Steven’s Underground Garage,” his syndicated radio show launched in 2002 and now broadcast on more than 130 terrestrial stations, including internationally in Canada, London, Italy, Spain, Ireland, Sweden, Belgium, Peru, and Australia, as well as worldwide on the American Forces Network and Voice of America.

Each week on the radio, Van Zandt takes audiences on a two-hour trip through all six decades of rock ’n’ roll, and also features the best emerging bands worldwide. Little Steven writes a 25-page script for every new weekly radio show, which is nearing 850 consecutive weekly episodes and has introduced more than 1,000 new bands.

Among Van Zandt’s many activist efforts was his formation in 1985 of Artists United Against Apartheid, for which he wrote “Sun City,” the rock/hip hop/R&B anthem protesting the apartheid system symbolized by the South African resort, Sun City. More than 50 artists including Gil Scott-Heron, Ringo Starr, Bob Dylan, Bono, Keith Richards, Run-DMC (whose Darryl McDaniels gave a keynote speech at the first Making Vinyl), and Miles Davis, performed on the track that spawned a conscious-raising album of the same name. He has twice been honored by the United Nations for his political activism, including the “Sun City” project and film, and his involvement in “International Peace Day” along with Peter Gabriel.

He wrote, directed and co-produced with his wife Maureen The Rascals: Once Upon A Dream, the critically acclaimed theatrical event/reunion concert tour that included a 15-night, sold-out run on Broadway. He keynoted SXSW in 2009.

Van Zandt’s acting credits also include the award-winning Lilyhammer, the FIRST original series on Netflix, in which he starred, was co-writer, executive producer, music supervisor and scored, as well as directed the final episode.